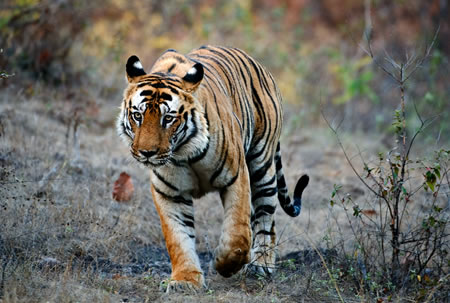 Tigers live in very diverse habitats. At one time the species could be found throughout Asia, from Turkey in the West to China in the East and on the jungle islands of the Southeast Asia all the way to the cold taiga of Russian Siberia. The species has diminished and is only found in seven percent of the land that it once roamed. It still is found in many diverse habitats. Subspecies of tigers have varied physical features and behaviours that are adapted to their assorted environments.

Like house cats, tigers will mark territory by scratching trees, or by leaving strong smelling urine and feces. The marking serves to warn other predators to stay away.

Hunting is thought to be done at night however recent studies, using unattended cameras, have shown that tigers will also hunt during the day when humans are not present. In the cooler forests of Russia, the Siberian tiger usually hunts during the day.

Tigers are powerful but do not have much endurance. They hunt by hiding in darkness and then creeping up on their prey. The back of the head is attacked first by biting down to swiftly kill their prey.

Although the males are generally solitary, they are much more social than other wild cats. They will share territory with other tigers, as long as they do not hunt the same area at the same time. Male tigers have also been seen to share their food with other tigers. Unlike lions, male tigers will sometimes allow females and cubs to eat first.

Human development into tiger territory is the main reason why tigers are threatened. Hunting grounds are being taken over by agriculture. Many zoos have animal adoption programs. Patrons can adopt a tiger in the wild to support programs that maintain habitats. There are also programs to sponsor a tiger and support the enforcement of laws to ban tiger hunting.

Tiger populations have been reduced by 95% in the last ten years, with only 4,000 remaining in the wild…

The increasing size of the human population is encroaching on the lands that tigers used to call their home. When the terrain they use to hunt is reduced and there is not sufficient natural prey, the tigers move towards domestic animals, which leads to confrontations with farmers and with tigers being killed in the process.

The population of wild tigers is declining quickly. It has dropped ninety-five percent just in the last ten years. Now there are less than four thousand in the wild. Three of the eight tiger subspecies are now extinct. With a population of only four hundred, the Siberian tiger is the only subspecies with a stable population. Sadly the success of the Siberian tiger is attributed to the fact that it lives in a remote area and rarely has contact with humans.

Humans are the main reason why tigers are threatened. Tigers are large animals and must have large territories to find enough food. As humans take over new land for farming or logging, they make the tiger territory smaller. They also drive out many of the animals that tigers depend on for prey. With less prey available, tigers actually need larger territories to find enough food.

Healthy tigers tend to avoid humans and developed areas. But when they become sick or malnourished they often must hunt domestic animals because there is no other choice. When this happens, the farmers kill the tigers.

The territories of tigers have also become fragmented and separated by human development. This means that tigers have access to fewer potential mates and it reduces the genetic diversity of the species. In the future, this may decrease the health of the entire tiger population and make them more susceptible to disease.

The leading cause of decline is the slaughter of wild tigers to make traditional Asian medicines. As the economy of Southeast Asia has become more prosperous, demand for tiger skins and body parts has increased. There are now more tigers being held in captivity in China than there are in the wild. Captive tigers are generally kept in small cages and bred to be slaughtered for body parts. Unlike zoos, these tiger farms do nothing to educate the public or help tigers in the wild. Even though these farms exist, poachers continue to hunt wild tigers and drive them towards extinction.

Conservation focuses on maintaining current habitat, exposing the illegal trade in tiger products and working with governments to protect tigers from illegal poaching. Animal adoption programs help raise money for conservation. Zoos often have fundraisers where people can adopt a tiger in the wild or sponsor a tiger for protection of its habitat.

Today, there are between 4600 – 7700 Tigers remaining in the wild in Asia. At the beginning of the century 40,000 were estimated to be roaming the jungles of the Indian subcontinent. Man is responsible for the dwindling Tiger population, through hunting and through the depletion of the natural wilderness where these beautiful creatures live. Time is running out, and we could see the demise of the Tiger altogether within a decade or two.

The Tiger. The very embodiment of power, agility and strength. The largest of the big cats, is internationally recognised as an endangered species. This means, that if present trends continue, the Tiger will become extinct in the wild. This fate has already befallen three of the eight subspecies; the Bali Tiger, Javan Tiger and Caspian Tiger.

Through adopting a Tiger you are helping to support the massive international effort required to save this stunning animal from extinction. 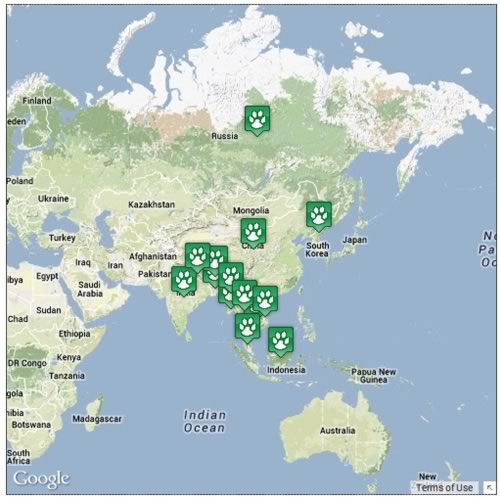