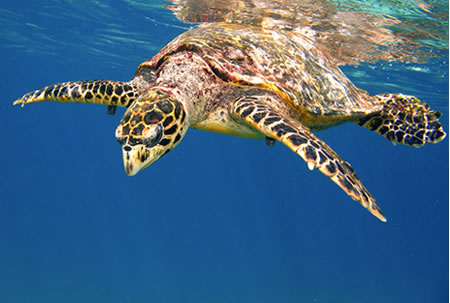 Adopt a turtle and receive

The Hawksbill turtle is one of the world’s great travelers, covering distances of up to 2400km between their feeding and breeding grounds. As you can imagine they are quite athletic as that’s a long distance to swim! They are relatively heavy animals for their size, and generally like to spend time alone. They can sometimes be found sunbathing in the sea, floating on their backs catching a few rays!

Hi there, I’m a Hawksbill turtle. I’m a bit funny looking and have a beak like a parrot! Please help me as I’m currently under threat and desperately need your help before I drift into extinction. There aren’t many of us left and it would be horrible if we all disappeared. Please help us if you can.

Sea turtles are found in almost every ocean and sea on earth. They range as far north as Alaska and Scotland and as far south as the southern tip of Argentina. Turtles are not found in the Arctic or Antarctic oceans as these environments are far too cold for reptiles. The largest turtles are found in warm equatorial waters.

Turtles are among the largest reptiles and the green sea turtle can reach two thousand pounds. Like most large animals, turtles spend most of their time finding and eating food. Different species of sea turtles have different diets that vary from strictly herbivore to completely carnivore and many turtles will eat almost anything. Typically, turtles will eat fish, shellfish, jellyfish and sea grasses.

Feeding grounds are often in fragile environments such as coral reefs and sea grass beds. Endangered sea turtles are experiencing habitat loss as pollution and sediment from construction spill into the ocean and destroy these delicate ecosystems.

Feeding grounds can be located hundreds, sometime thousands, of miles from nesting grounds. Sea turtles have a remarkable sense of direction and are able to return across the ocean, to the same beach, every breeding season.

The female sea turtle breeds with the male in shallow waters and later comes onto the beaches to lay her eggs. The male turtle may never leave the ocean. Once the female sea turtle lays her eggs, she buries them in the sand so that they are hidden and protected. She leaves the eggs and returns to the sea. When the baby sea turtles hatch, they will fend for themselves. Instinct tells them to go to the sea and they make their way down the beach. This is the most dangerous time of a sea turtle’s life and nine out of ten new turtles are killed by predators. Before they even get to the ocean, they may be picked off by birds or eaten by raccoons. Once in the water they are in danger of being eaten by large fish.

Turtles do not adapt easily to dangers in their nesting grounds. They are unable to assess the safety of their beaches before they are ready to lay their eggs. Instinct tells them to return to the same nesting grounds over and over again, regardless of what changes humans have made to the beach through construction or industry. When you adopt a turtle, you provide financial support for turtle conservation projects that focus on preserving the nesting grounds.

Over 250,000 marine turtles are killed each year by becoming entangled in fishing lines and nets …

The world’s turtle population can be found in nearly every ocean on earth. But their global grazing is not supported by great numbers because of threats caused by humans. Aggressive fishing practices, poaching for turtle shells and pollution (which turtle’s mistake for food) all contribute to the dwindling turtle population.

After successfully surviving for over a hundred million years, endangered sea turtles are now under threat of extinction because of human impact on their environment. Of the seven species of sea turtle, six are considered to be endangered or critically endangered.

Turtles are still killed for their shells. Poachers capture the turtles as they come ashore to nest. The shells are preserved and sold to tourists as grisly souvenirs.

Poachers also harvest the eggs from turtle nests. The eggs are sold in restaurants and stores where they are considered a great delicacy.

Construction, development and run-off are destroying the shallow sea grass fields and coral reefs where turtles find their food. When buildings are constructed, rock and soil are excavated and become unstable. Rain washes sediment from construction into the ocean where it pollutes the turtle’s feeding grounds. Paved areas like roads and parking lots also create run-off that carries oils from cars into the water. This pollution doesn’t kill the turtles directly. It can destroy the plants and animals that turtles eat.

Fishing and boating also pose serious threats to the turtles. Fishermen are often attracted to the same areas as the fish-eating turtles. The turtles get caught in the fishing nets and are drowned. Turtles normally swim near the surface of the ocean where they are often killed by boat propeller accidents.

Turtle conservation projects focus on monitoring endangered sea turtles. They support fishermen in poor countries so that they use equipment that is less likely to hurt sea turtles. These programs are helping to save the turtles by educating government about land development issues that affect nesting and feeding grounds. They also work to end the illegal poaching of turtles and their eggs. 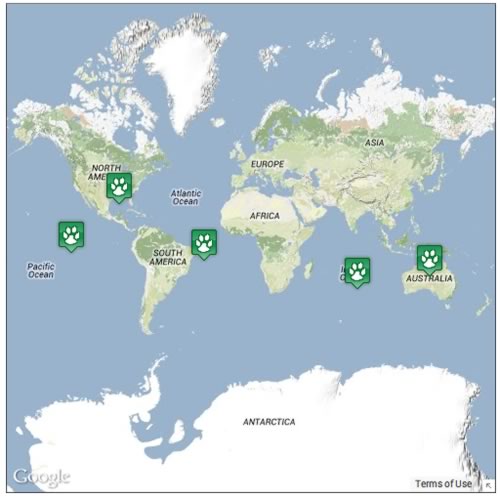 The turtle population can be found in the following regions and oceans of the world.